These terms and conditions («Terms», «Agreement») are an agreement between flutgut Art.is takeaway («flutgut Art.is takeaway», «us», «we» or «our») and you («User», «you» or «your»). This Agreement sets forth the general terms and conditions of your use of the flutgut.com website and any of its products or services (collectively, «Website» or «Services»).

You shall pay all fees or charges to your account in accordance with the fees, charges, and billing terms in effect at the time a fee or charge is due and payable. If, in our judgment, your purchase constitutes a high-risk transaction, we will require you to provide us with a copy of your valid government-issued photo identification, and possibly a copy of a recent bank statement for the credit or debit card used for the purchase. We reserve the right to change products and product pricing at any time. We also reserve the right to refuse any order you place with us. We may, in our sole discretion, limit or cancel quantities purchased per person, per household or per order. These restrictions may include orders placed by or under the same customer account, the same credit card, and/or orders that use the same billing and/or shipping address. In the event that we make a change to or cancel an order, we may attempt to notify you by contacting the e-mail and/or billing address/phone number provided at the time the order was made.

We are not responsible for Content residing on the Website. In no event shall we be held liable for any loss of any Content. It is your sole responsibility to maintain appropriate backup of your Content. Notwithstanding the foregoing, on some occasions and in certain circumstances, with absolutely no obligation, we may be able to restore some or all of your data that has been deleted as of a certain date and time when we may have backed up data for our own purposes. We make no guarantee that the data you need will be available.

Links to other websites

Although this Website may be linked to other websites, we are not, directly or indirectly, implying any approval, association, sponsorship, endorsement, or affiliation with any linked website, unless specifically stated herein. We are not responsible for examining or evaluating, and we do not warrant the offerings of, any businesses or individuals or the content of their websites. We do not assume any responsibility or liability for the actions, products, services, and content of any other third-parties. You should carefully review the legal statements and other conditions of use of any website which you access through a link from this Website. Your linking to any other off-site websites is at your own risk.

In addition to other terms as set forth in the Agreement, you are prohibited from using the Website or its Content: (a) for any unlawful purpose; (b) to solicit others to perform or participate in any unlawful acts; (c) to violate any international, federal, provincial or state regulations, rules, laws, or local ordinances; (d) to infringe upon or violate our intellectual property rights or the intellectual property rights of others; (e) to harass, abuse, insult, harm, defame, slander, disparage, intimidate, or discriminate based on gender, sexual orientation, religion, ethnicity, race, age, national origin, or disability; (f) to submit false or misleading information; (g) to upload or transmit viruses or any other type of malicious code that will or may be used in any way that will affect the functionality or operation of the Service or of any related website, other websites, or the Internet; (h) to collect or track the personal information of others; (i) to spam, phish, pharm, pretext, spider, crawl, or scrape; (j) for any obscene or immoral purpose; or (k) to interfere with or circumvent the security features of the Service or any related website, other websites, or the Internet. We reserve the right to terminate your use of the Service or any related website for violating any of the prohibited uses.

You agree that your use of our Website or Services is solely at your own risk. You agree that such Service is provided on an «as is» and «as available» basis. We expressly disclaim all warranties of any kind, whether express or implied, including but not limited to the implied warranties of merchantability, fitness for a particular purpose and non-infringement. We make no warranty that the Services will meet your requirements, or that the Service will be uninterrupted, timely, secure, or error-free; nor do we make any warranty as to the results that may be obtained from the use of the Service or as to the accuracy or reliability of any information obtained through the Service or that defects in the Service will be corrected. You understand and agree that any material and/or data downloaded or otherwise obtained through the use of Service is done at your own discretion and risk and that you will be solely responsible for any damage to your computer system or loss of data that results from the download of such material and/or data. We make no warranty regarding any goods or services purchased or obtained through the Service or any transactions entered into through the Service. No advice or information, whether oral or written, obtained by you from us or through the Service shall create any warranty not expressly made herein.

To the fullest extent permitted by applicable law, in no event will flutgut Art.is takeaway, its affiliates, officers, directors, employees, agents, suppliers or licensors be liable to any person for (a): any indirect, incidental, special, punitive, cover or consequential damages (including, without limitation, damages for lost profits, revenue, sales, goodwill, use or content, impact on business, business interruption, loss of anticipated savings, loss of business opportunity) however caused, under any theory of liability, including, without limitation, contract, tort, warranty, breach of statutory duty, negligence or otherwise, even if flutgut Art.is takeaway has been advised as to the possibility of such damages or could have foreseen such damages. To the maximum extent permitted by applicable law, the aggregate liability of flutgut Art.is takeaway and its affiliates, officers, employees, agents, suppliers and licensors, relating to the services will be limited to an amount greater of one dollar or any amounts actually paid in cash by you to flutgut Art.is takeaway for the prior one month period prior to the first event or occurrence giving rise to such liability. The limitations and exclusions also apply if this remedy does not fully compensate you for any losses or fails of its essential purpose.

You agree to indemnify and hold flutgut Art.is takeaway and its affiliates, directors, officers, employees, and agents harmless from and against any liabilities, losses, damages or costs, including reasonable attorneys’ fees, incurred in connection with or arising from any third-party allegations, claims, actions, disputes, or demands asserted against any of them as a result of or relating to your Content, your use of the Website or Services or any willful misconduct on your part.

All rights and restrictions contained in this Agreement may be exercised and shall be applicable and binding only to the extent that they do not violate any applicable laws and are intended to be limited to the extent necessary so that they will not render this Agreement illegal, invalid or unenforceable. If any provision or portion of any provision of this Agreement shall be held to be illegal, invalid or unenforceable by a court of competent jurisdiction, it is the intention of the parties that the remaining provisions or portions thereof shall constitute their agreement with respect to the subject matter hereof, and all such remaining provisions or portions thereof shall remain in full force and effect.

The formation, interpretation, and performance of this Agreement and any disputes arising out of it shall be governed by the substantive and procedural laws of Balears, Spain without regard to its rules on conflicts or choice of law and, to the extent applicable, the laws of Spain. The exclusive jurisdiction and venue for actions related to the subject matter hereof shall be the state and federal courts located in Balears, Spain, and you hereby submit to the personal jurisdiction of such courts. You hereby waive any right to a jury trial in any proceeding arising out of or related to this Agreement. The United Nations Convention on Contracts for the International Sale of Goods does not apply to this Agreement.

We reserve the right to modify this Agreement or its policies relating to the Website or Services at any time, effective upon posting of an updated version of this Agreement on the Website. When we do, we will revise the updated date at the bottom of this page. Continued use of the Website after any such changes shall constitute your consent to such changes.

If you have any questions about this Agreement, please contact us.

This document was last updated on December 6, 2018 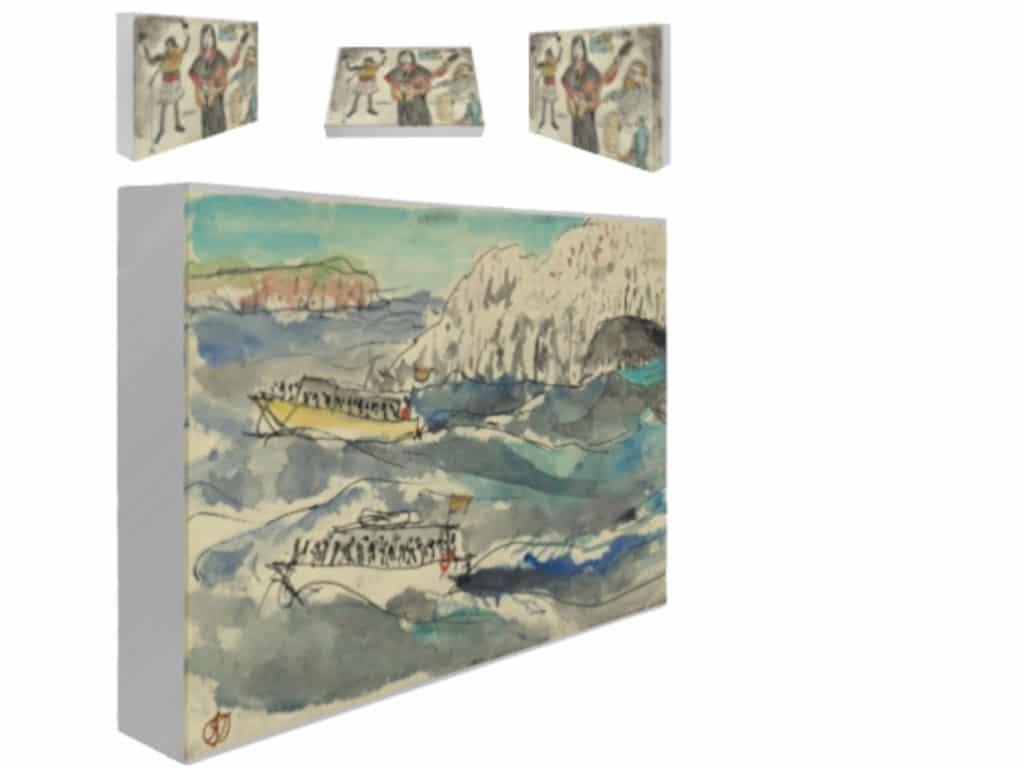 Good looking - good price ! Have your favorite illustrations from the DIARIO CRONICO on your wall. Available on canvas and ready to hang up for only