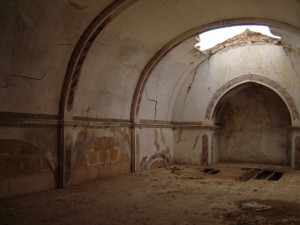 Ses Salines, a village in the south of the island of Mallorca and residence of the artist, celebrated during the 1-of-may village festivities the opening of a new cultural center, the recently restored ‘old church’ L’Eglésia Vella, with an exhibition by artists living in the community.

Arti Leimbacher followed the invitation by the town council showing a reduced number of studies and paintings, the most of them produced at the ‘Seaside Studio’, a flat along the seafront where the artist worked during summer 2007.

Building up the exhibition was for the artists- Carolina Blanco, Francesc Bonet,Tomeu Estelrich and Arti Leimbacher a sort of surrealistic hazel due to a lack of installations, missing electricity and an awful smell from the septic system, a fact which obliged the artists to run out of the building once a while. Technicians from the Ayuntamiento were able to get rid of the smell before the exhibition opened to the public with a concert given by the sopran Antònia Aina Roig and the pianist Francesca Suau. Neither the inconveniences nor the little press coverage had an influence in the number of visitors attending the new center, many days crowded. Over-visiting caused by the popularity of the festivities.